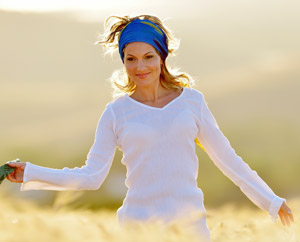 In this study, researchers explored the effects of a beta-glucan supplement (Wellmune WGP® b-1,3/1,6-glucan), from a purified strain of baker’s yeast (Saccharomyces cerevisiae) on physical and emotional symptoms in people with self-reported ragweed allergies. Daily for four weeks, 50 randomly assigned participants (ages 18 to 53 years) were either given a 250 mg beta-glucan supplement or placebo. Before and after the intervention, serum levels of a marker for immune system activity (IgE) were measured, and physical and emotional symptom questionnaires were filled out.

Results showed that compared with the placebo group the supplement group had 28% fewer total number of allergy symptoms and symptoms were 52% less severe. At the end of the intervention, quality-of-life ratings improved significantly in the supplement group, including fewer sleep problems and nasal and eye symptoms, compared with their baseline ratings and with placebo. Serum IgE levels were not affected in either group.

The study authors comment that beta-glucans “activate the entire immune system, which may be advantageous for their use as therapy for disease.” They add that beta-glucans are effective, naturally occurring substances that may be less costly and have fewer side effects than conventional therapies.

This small study, funded by the makers of Wellmune WGP®, suggests that beta-glucans may benefit allergy sufferers, but further research is needed to better understand the safety and effectiveness of beta-glucans in allergy treatment.

Allergies may cause a lot of physical and emotional distress in the people who suffer from them, and can also make common conditions such as asthma and sinusitis worse. In fact, allergy symptoms contribute to a significant amount of work and school days lost each year in this country, according to the study authors. The fact is, no one wants to walk around with a daily runny nose, sneezing, and itchy eyes. Fortunately, there are steps you can take to find relief:

Explore an integrative approach. The most important thing to do is discuss all of your symptoms with a doctor, to determine whether or not you have allergies and the cause of your symptoms. Then consider your doctor’s recommendations on testing and treatment. Medications alone are helpful for some but often provide little or incomplete relief for many others. An integrative approach explores how conventional therapies such as medications and natural options may work together to help you feel better. This type of approach may include a combination of medications, lifestyle changes, and complementary therapies such as supplements.

Check your environment. Managing your environment is key when it comes to addressing allergies and doing what you can to minimize exposure to pollen and other irritants. For those who suffer from ragweed allergy (hay fever), symptoms tend to be worse in the late summer and early fall. The American Academy of Allergy, Asthma and Immunology recommends a few steps you can take to minimize exposure, which include: keeping your windows closed at night and if possible, using air conditioning and/or air filters; try to stay indoors when the pollen counts are at their highest; avoid or assign the task of mowing your lawn or raking leaves to someone else, as these activities release pollen. Also, you may consider not letting pets that have been rolling around outside in the grass sleep on furniture such as your bed or the couch.